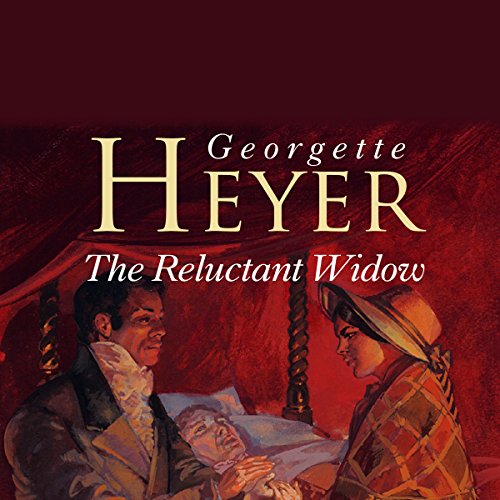 There is a tiny part of me which sometimes takes guilty pleasures in mixing up the lighthearted fun of Georgette Heyer amongst more popular or fancy titles. I thought I was done with the listening binge when I did not enjoy the last one too much but then , I gave in and tried another and now I am back on track with trying to listen to more of these audiobooks.

The light humour and the implied sarcasm at most turns which half of the boisterous cast do not get causes its own humourous setting. This story was slightly different from the others I have heard/read recently. Obviously it has a happily ever after, but how we get there was fun to watch unfold. I would recommend a well narrated Georgette Heyer over reading one, because they hit all the right notes and make you actually feel like you were watching it happen! In this tale, Elinor Rochdale gets caught int a mistaken identity scenario which lands her married to a man on his death-bed. Once she finds herself an official widow a day after, things start to take a turn for the worse. There is political intrigue afoot and the man who has talked her into this situation, and his two (adorably cute) brothers give her company to try to straighten things out. It is a simple story with a few twists but gets progressively funnier. If it is not the antics of the youngest brother or the studious interference of the other brother John it is the battle of wills amongst our lead couple. It made me smile for the most part and I had that airy feeling of enjoyment(I am sure most of you would know what I mean by that) that I had to give it the full five-star rating despite the lack of the things that typically make the current crop of such acclaimed books on Goodreads at this time.

Now, thus refreshed, I hope to bring other types of books back into this blog and hopefully induce people to try them out for size.