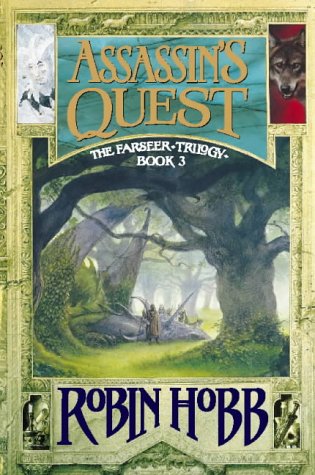 I began this series ( previous reviews #1,#2) on the recommendation of a friend, two in fact, and they were more than happy to induct one more person into their fan club. Truth be told, I liked the first book but did not place it on any pedestal. I can say that because I realise now what really liking the series means. The second book’s ending made me sit bolt upright and I could not wait for the next. I had to wait till I was back from my holiday though, and then for a chance to go pick up the book from the library and then finally read it! I was rewarded for this wait as forty pages in I was already shedding tears for all the aching hearts in the book.This may seem a strange reward to most random people, but those who ‘feel’ with books should get what I am trying to say.

I will be just providing one spoiler for the previous book, which the blurb would indicate as well. Fitz survives.But the survival comes at a cost ( some of it will be paid by our tears and others by almost all people who are associated with him, including himself). There is a lot that goes on in this book, it is the biggest of the three and it goes into minute details to tie up all the loose ends of the tale. Fitz embarks on a solo journey to redeem his life and ends up doing something completely unforeseen ( I refuse to make the Farseer pun that is tempting me write these words). There are proper battles waged, multiple perspectives gained and everyone’s beliefs tested. All of this is for a King , his Kingdom and more.There is so much bonding among the ‘pack’ ( to find out who they were, you will need to read the book) and each of them have cracks in them which make them all the more believable. There is a lot more fantasy spun in this story, which will take us beyond what we thought we knew of their world. The ending was bittersweet but it helped to put the book away and only think about the smaller joys that I leave behind.

If it is not clear that I relished the series, I will say it again. This is one series that gets better with each book instead of the other way around. All the people are really well fleshed out and we can feel both their happiness and their sorrows.