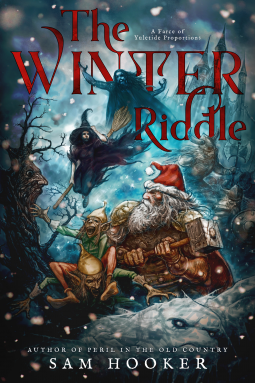 I need to begin with something I am sure multiple blurbs will mention at some point. If you are a fan of Terry Pratchett, Douglas Adams and/or Neil Gaiman there is something  in this book that will resonate with you. There is a randomness to the story which eventually gets to a point which will make you smile.

The story begins in a land far, far away with the winter witch Volgha. All she wants is to be left alone to do her own things. This is hampered by the fact that she was originally born in the local royal family. The rest of the introduction is part of the fun included in the start of the tale. Then we have Santa who happens to be in the same locality but he is not exactly of the folklore that we have now. There are also Norse Gods thrown (very casually) into the mix. I am glad I read Norse Mythology by Neil Gaiman quite recently and so was up to date with the situation with regards the Gods ( It also helped me understand what was going on in The Long Dark Tea-Time of the Soul (Dirk Gently #2) by Douglas Adams too!)

This is a chaotic tale, with the conversations and the sarcasm and all the ‘asides’ that people tack on to the conversation being the main feature. All of that being said, I would have liked the book even more if it had been split into two only because it would have made reading it easier. There are some things I found funnier than others but overall I think this is an author who has the tone right. I would definitely recommend the book and try any others I can get my hands on.