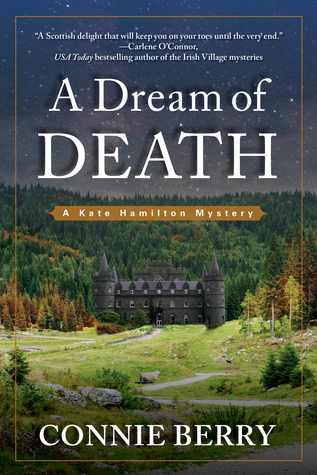 I started this book last night and the minute I got through the first chapter I told myself that this was a cozy mystery done right. It had the power to make it about more than the murder that occurs, more than just mere curiosity that drives the lead protagonist. There are also the credentials that the protagonist carries as a badge that plays a vital role in the case itself.

If you have noticed my recent reviews of a lot of cozy mysteries, you will notice that I markedly enjoy fewer than most of the other audience. It is mostly because I like a certain style of narration and emotional investment. I am not saying all the ones I did not like were of the same ilk but you know when a writers personal style suits your temperament. The only reason I gave this book four stars out of five is that I have already queued up the second book to read and I want to set the bar higher.

Kate Hamilton has flown all the way from the US at the behest of her estranged sister-in-law. She promised her late husband that she would always take care of her and now she has to live up to the promise. It is hard to follow through, mostly because Elenor is not liked by anyone on their small island. Kate is the only one who sees a pattern in what happens next. It has a lot of similarity to an unsolved mystery involving a local legend, and although it happened two hundred years ago, the shadow seems to stretch a long way. There are enough clues dropped our way to ensure both of the following

This pleasing combination of the two conditions and the characters, as well as the fact that the end is not all wrapped up in the usual standard model but more realistically makes it a pretty good read. I look forward to spending some quality time with the next installment.

I received the book as an ARC but the review is completely based on my own reading experience.