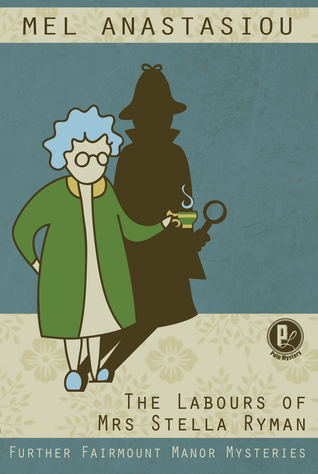 This is the second book of a series but seemed to work well on its own. The background information was repeated enough times to keep the people straight in our mind.

Mrs. Stella Ryman, an ex-librarian who checked herself into a care home is the resident ‘detective’ with the worst sense of direction (something that does not seem to be a byproduct of her age). There are a total of two cases in this but it is divided into further individual parts. One case was more interesting than the other, mostly because I was unable to invest emotionally in the latter one which is introduced early on in the narrative.

In the first half of the book, an unexpected and relatively unwelcome man joins the brood of elderly folk at the care home. He seems to have an ulterior motive and unscrupulous moves to attain the goal and Stella is the only one who seems to be doing anything about it. The second story involves a mahjong box with missing money. The quirks of the people in the care home and some of the jokes were funny but for the most part, this was not a book for me. When I went into a story about a place where so many people live in almost prison-like protection, I expected something different from the tale. If you like quirky characters and the exchange of random conversations, I would recommend you give this book a shot! There is a lot of heart involved in the narrative and that in itself is a good thing.

I received an ARC thanks to NetGalley but the review is completely based on my own reading experience.