I went on a culling spree and took away two books which I was floundering with on my NetGalley queue and told them why it was not working for me. I have given myself permission to do that because if I had finished struggling through it, I would have actually rated it badly despite it having glowing reviews elsewhere. This is only slightly different from books I did finish and still not liked. I am debating this moral dilemma and maybe will come to a satisfying conclusion at some point, but that time is not now. Moving on to a book I did enjoy today. 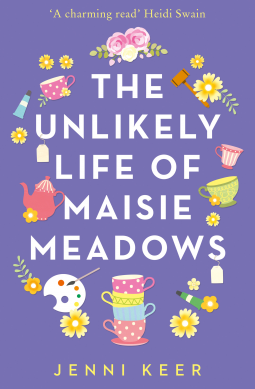 I really enjoyed the author’s previous book: The Hopes and Dreams of Lucy Baker and looked forward to this one! It did not disappoint.

The tale did not have a very auspicious beginning, Maisie and her boyfriend were the first chapter and I sighed at the standard beginning and have to truthfully admit I was a little apprehensive since I have not been picking books to my taste very often recently and have had to switch around a little to find the right one. By the second chapter, I was reassured by the way the tale was turning and soldiered on. The story then picks up pace, Maisie makes a life change and lands an odd but interesting job surrounded by people who could be caricatures of themselves. This delightful setup in an auction house raises the stakes for all forms of miscommunication between almost all of the people in the narrative. Although I guessed all the times when lines were crossed and there were missed opportunities, it was still fun to watch a few of them unfold (the others had me rushing them on under my breath to speak more clearly to each other- a trait of talking to the characters symbolizes a positive influence in my opinion, however annoyed the talk may be).

Maisie has had a troubled upbringing, parts of which she is only now confronting. The baby of the family tries to be the glue who holds the tattered fragments of her three siblings and separated parents together but she is not doing anyone any favours. Some of the turns of the story were too convenient but on the whole, was an encouraging read. I liked the first one better although I liked the magical element of this one and its ‘side effects’ more than the cat in the other book.

I would recommend this to people who are on the lookout for a book in the uplit genre without too much of conflict apart from the family kind.

I received an ARC thanks to NetGalley and publishers but the review is completely based on my reading experience.