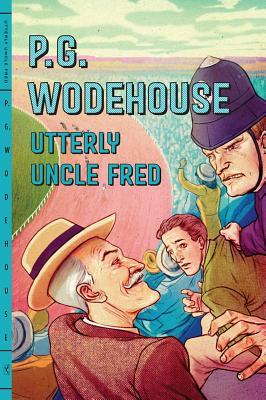 I felt a sudden urge before I left for my vacation to unwind with a book from my own shelf. I purchased this omnibus sometime in 2012 at the Strand in New York. I only went there infrequently in the time that I lived in the area and every visit was an adventure in itself and I would have gone more often if not for the lack of control I had when I visited. It was one of the few places that I never left without a purchase. Two birthdays in a row I was given a budget and allowed to go wild and this was in that lot. I may have actually read it cover to cover before but I remembered only parts of it and I enjoyed the leisurely stroll I took with Uncle Fred and all of his friends, relatives and even mere acquaintances who feared what trouble he would bring in his wake.

There are multiple stories in this book, which do not necessarily move in chronological order but have enough of an explanation to identify where we stand. Uncle Fred or Frederick Altamont Cornwallis Twistleton the 5th Earl of Ickenham, loves to help. Even when he hasn’t been explicitly approached for that purpose. He disregards the embarrassment his suggestions may lead people into as long as the final goal is achieved. He means well and adores the people he likes and chides and literally torments the people he doesn’t. The Ickenham method of wooing that he recommends to the lovelorn men he crosses paths with is not something that translates well into this century but as with a lot of other factors of a Wodehouse book, I think it is meant to be sarcastic. The titled make fun of themselves and the situations are beyond comical. There are things that one story borrows with another, for eg A would say something to Uncle Fred who would use it in the next story for B and so on. I wouldn’t recommend this for someone starting to read Wodehouse but for someone decently familiar with the comic style and timing as well as the absurdity of it all. Read it when you have time to lounge around it with it because just plain speed reading the words does not get the joke into your read, it has to be savoured as any who have read and liked the author could attest.