This is the second post on the whole identity theme. 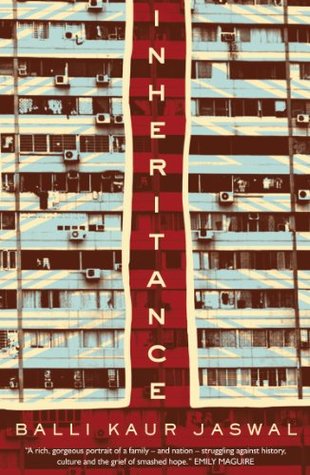 My last review featured an Irish family on the East coast of the US and with this, I jump all the way across to the west, with a Punjabi Family in Singapore. This story begins along with the start of Singapore as we know it now.

I have not read many #OwnVoices when it comes to Indian tales, mostly because not many are within reach and quite often I am not comfortable with the narration. Sometimes I feel like the writers play up stereotypes to keep the overall larger worldwide population happy. This book did not worry me on any of those counts. I have seen a lot of reviews of the author’s current works and when I saw this just sitting on a shelf in my library ( I borrowed one with a different cover of a woman on it, but this felt more appropriate) I had to check it out (pun intended).

The tale spans a few decades of the Sandhu family, a father raising his two sons, one nephew and daughter by himself (or so the world thinks). Each person comes with their own foibles, and this makes them insecure in more than one situation. They immigrated from India to Singapore at a time when the country they moved to was only beginning to find itself and they have their community to be a part of. With the rise of this new multi-cultural country and having enough of your community around to keep an eye on you, there is a lot of pressure on everyone. Each mistake or misstep is multiplied by every person who would know and talk about it. Even those who mean well only add to the count of people who the characters would rather not have any knowledge of their actions. There is a degree of respect that the people retain for their customs but at the same time try to make sense of what it means to be just themselves. A lot of the story is painful to read about and I think it was meant to be.

The highlight of the story apart from this family, was the information about Singapore that was littered in the background of the narrative. It forms the backbone that holds all the different periods in the book together. It was fascinating to see this information because I realized I knew next to nothing about the rise of the country and the sacrifices people had/have to make it what it is today. It is a bitter pill to swallow but an enriching experience. There are a lot of triggers in this narrative for those who are affected by traumatic incidents and usually, it would have bothered me to distraction but there was something about the gritty quality of how things move on, that I had to move on with the tale as well. The writing and the story dragged in some places but this was an early work by the author and I think it shows her potential. I will keep my eye out for any other books by the author on my next visit to the library.