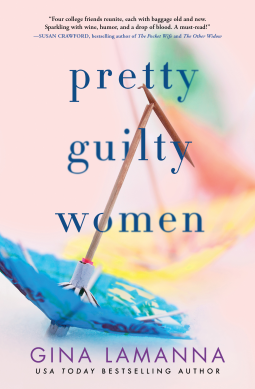 This is a story of four friends who all claim to be guilty, three who are part of an old foursome from college and one who bonds with them over drinks at the fourth (of the old group)’s wedding. At this wedding, something quite unexpected happens.

I actually enjoyed the pattern of the narrative, one chapter is the dialogue between the investigating officer and one of the numerous cast and the other is the actual story as it unfolded. I was actually hooked trying to predict what the chapter following a sudden announcement from the Inspector would consist of. I got quite a few things wrong which in itself delighted me. The plot was not intricate, and the narration is deceptively simple but the joy in the book was this simplicity. I know friendships between women are usually the central plot to a lot of books but this seemed realistic to an extent, two friends are closer to each other and all four were a team. Then life came in the way and they grew up. This growth is measured differently for everyone while holding on to the realistic possibility that in the future they might actually enjoy each other’s company again. Lulu( the new friend) is a strange character and personally, I do not think she brough much to the story except for an extra bit of guesswork as to what her secret might be. I also would have liked it more if we got to see the bride speak for herself after all the other impressions that were scattered around by others who knew her.

Overall a good tale that I would give 3.5 stars out of 5 but since hardly any website allows that I have to round it up to a 4.

I received an ARC thanks to NetGalley and the publishers, but the review is completely based on my own reading experience.