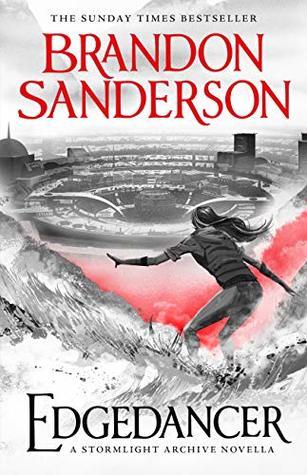 I have reviewed the other mammoth-sized books in this series and the cover pages will lead you to them. While I wait impatiently for the next edition which is slated to be released only next year (and after that, I will have to wait for it to be available in the library) which essentially means more than a year for me, I decided to give this pint-sized book what gives us just one extra adventure of a lesser focused character of Lift.

Lift is a lighter protagonist as compared to all the others. Despite having a tough life, with hunger and other dangers always lurking at the edges, she managed to survive and thrive. She is such an odd choice, that her spren Wyndle continues to lament his fate to be associated with someone like her who does not intend to be older than the number of fingers on her hand (since it would be ‘unlucky’!). She is chaffing at the luxury of being the right-hand woman of a ruler and takes off. She says she has no purpose but that story is soon set aside for the truth and she learns a lot about herself and her spren. Now, from what I have seen in the ratings of other series’ the 0.5 type books that are set in between the larger volumes do not receive much love from die-hard fans because of some reason or the other but this one is good. It has a story, it has humour and adventure. It has the growth of the character in the center of it all as the author intended it too. The only reason I cannot give it five stars is that there was too little of it! There is an iteration of a chapter from when she was introduced in the main series which took up a lot of pages and therefore it left me wanting more! After reading about all those important, burdened and therefore sadder, older counterparts it was refreshing to spend some time with the spunky, always hungry Lift.