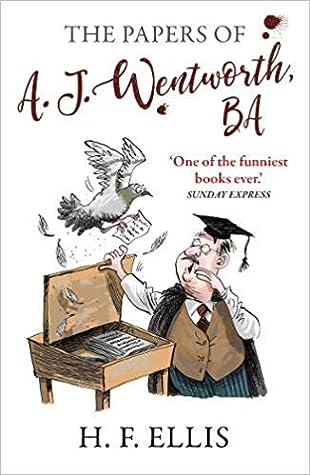 This book was originally published in 1949 and is one of the many books being republished to bring to the attention of people like me, who would never have read it otherwise!

I was torn between my emotions for poor Mr.Wentworth. I wanted to think of him as a pompous man who deserved the treatment received from both his pupils and his fellow teachers, but in those rare moments when he laughed at the situation himself, I had to think again. Mr. Wentworth is very sure of himself, but his students sound like terrors!. They start the most random of arguments to deviate the class from the topic and hand and he struggles to bring them back to the course and even has the occasional victory. There is a chapter of two to show how his fellow teachers succeed in pulling his leg and another chapter or two when he gets drafted into the army. Some actions towards our unlikely protagonist could be put down as bullying but then a wider background is given it seemed harmless enough for me to find funny. It is lighthearted and simply written, so much so that I have nothing left to talk about the book!  If there was more in this book itself, I would have given it five stars but it ended abruptly leaving me wanting to know more.

I received an ARC thanks to NetGalley and the publishers, but the review is completely based on my own reading experience.