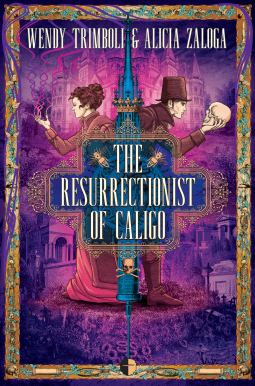 I have a habit of accumulating my reading until the point that I cannot see where it began and where it ends. Then, when I use random ideas to kick start my way through the list, I sometimes stumble upon some hidden surprises. I did not remember the synopsis by the time I started this tale but did not suffer for it. In fact, it might have been the reason I enjoyed it!

This is a victorian/steampunk surrounding where our reality is inverted a little. Magic has more clout than science does. Considering the level at which the medical industry is depicted here, it stands to reason that that would be the case. We are allowed to better understand the two parts of the city through the eyes of two people on the opposing side of the argument while having a whole other relationship between them. The princess Sybilla has manifested a few talents from her line of magical ancestors but is kept in seclusion for failing to comply with her grandmother’s wishes. She is to be brought back to society for some hidden agenda that she cannot wait to get to the bottom of. Roger has made many sacrifices to be called a Man of Science. He has to dig up bodies to further his studies and to earn enough to keep him afloat. Apart from their past, there is a new reason these two are linked (more than one, but murder turns out to be the primary one), that of a spate of killings. The deaths are attributed to a strangler, but no one questions the reasons and the common factors between the victims apart from Roger and Sybilla. There is a lot about this world and its magic that we as well as the protagonists are unaware of, but the steady trickle of information made the book a treat to read. The supporting cast is also very vivid and entertaining in their own right.

There is a lot of drama, politics, tons of secret manipulations and a lot of undercurrents of emotions. The only reason I do not give this a full five stars is because I am holding out to see what happens next to them all.

I received an ARC thanks to Netgalley and the publishers but the review is entirely based on my own reading experience.