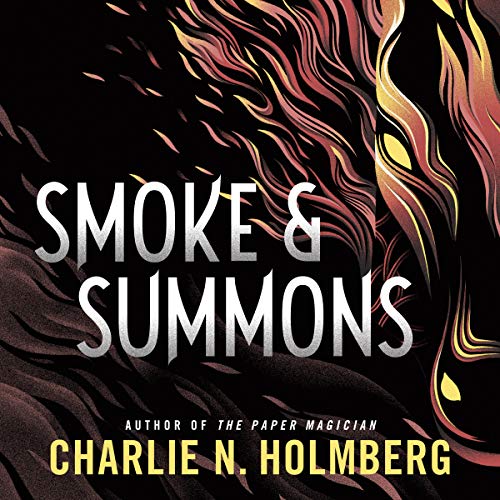 I read the whole Paper Magician series by the author but only reviewed The Plastic Magician on the blog. I also found The Fifth Doll pretty entertaining, so I started this new series with some semblance of excitement.

We are introduced to a world where the Almighty is someone/thing called the Celestial, and the smoke-filled country is rife with poverty and disease. The occult is banned but a powerful few practice it with a vengeance. Some of the events seemed repetitive and I would not have liked reading them over and over again but listening to it made the difference. Our leading lady/girl is Sadis. She is too naive for her own good and she does not learn her lesson and continues to believe people she shouldn’t!! Although she is portrayed as an almost selfless character, her behaviour at times is questionable. Sadis is also a victim of circumstances but there are secrets about her past that we are yet to unlock and I am looking forward to that in the next book. Her partner who helps her out is Rone, another victim of circumstances who may have come into his own. His chance meeting with Sadis and the last ‘job’ he does leaves him in very complicated headspace. His character was quite refreshing, both weak and strong simultaneously making him another good character to root for.

There is magic, another plane of existence and an older civilisation buried under the current one. All of this is a good starting point to a fantasy series, it remains to be seen if it can pick up the stakes and raise them.

My last KU review was: Lying Next to Me by Gregg Olsen and my queue now looks like this: