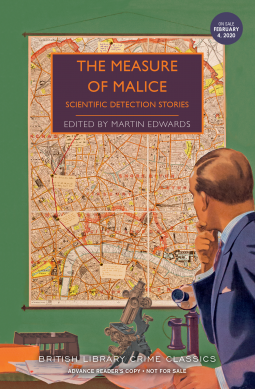 I rarely (if ever) review the individual stories in a collection of short stories but given the fact that my varying reactions to the several I encountered in this book, I had to split it up to give a more accurate picture of the book itself. It is a collection of stories where the detectives use ‘scientific methods’ to come to their conclusions. In some cases, the thought process is not as apparent as in some others.

This was an odd story, and a little abrupt but the characters introduced to us in the telling of it were fun. We have a grumpy boss with exacting standards who is scaring his assistant into submission when she finds a body and then loses it shortly after. The cracking of the case was not as startling because of the lack of numbers of people introduced to us, but the narration itself was the highlight. (4 Stars)

This felt like a very swift story. There is a surprise discovery of a woman in a water butt, and the suspect is the husband, but he has a solid alibi. The tale then picks up from there and here too an odd random incident precipitates the revelation, but it was still entertaining (4stars)

Although I did not measure the stories, I think this was the shortest of the lot. I was done before I knew it and knowing I had missed something I had to read it twice to see where that twist lay. When I did spot it, I found it highly entertaining, even though we are speaking of murder and murderers. (4stars)

This final story was pretty straightforward. It jumps right into sabotage and then from there it is all about tracing the origins of the plot. (3 Stars)

Sometimes it was the story, occasionally the writing and very few times it was the mystery plot itself that caught my attention. I am glad I gave it a shot, but for most of these authors, I think I might prefer their longer stories.