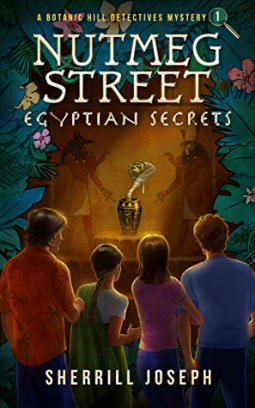 This is the first of a series with an already established group of friends who solve mysteries. They are official, with a name and credentials and past cases that we are only given glimpses of. The past will probably be referenced in future books in more detail to provide a better picture.

The pair of twins have parents who travel the world for their work and are well versed in most things Egyptian. The case that has been handed to them has to do with a missing urn, the disappearance of which was blamed on a friend of theirs. His widow now wants closure, and they aim to help. There are earthquakes, chase scenes and a thorough examination of all connected topics, especially snakes and the ending makes sense while being unexpected. Although I am not the target audience of this book, I still felt like there was a lot more telling than showing. The nuances of the scenes were told to us instead of being implicit. The children did seem a little on the nose, with the Hawaiian being the biggest and hungriest, the Indian in a Sari (and with previous direct experience with snakes). I agree with Shalini here that very few thirteen-year-olds would wear a full saree (although my 5-year-old niece does have a custom fun-sized one, usually it is limited to adult women). There are these half saree versions if you are from the south which would have been more comfortable given the spread of the bottom part, or the ‘skirt’. The author has actually responded to state that this is taken from an actual person of her acquaintance so that reaction is a moot one.

Overall, it is a promising start, but the narrative style was not exactly my thing. I did like the premise and the potential within it, and I think people younger might like it to broaden their horizons, but slightly older ones might not require the amount of detail in the telling.