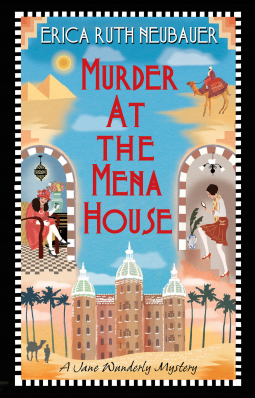 Every time I see the first in a series, especially with more promised to come, my eyes perk up, and I almost automatically request an opportunity to get my hands on it. Sometimes I am rewarded for this impulse, but most often, I am not. In this case, I was glad that it was the former situation.

The leading lady in this is a very multifaceted character. She has a leg in the American world and the British, a painful past and did I mention this is all based in post World War Egypt? Jane has been asked to tag along with her aunt on an all-paid trip to Egypt and from the day she finds herself at the Mena house, she is thrown into a lot of happening things. First, she meets almost all the characters who are to play various roles in the upcoming mystery. Shortly after that, the first murder occurs, and Jane is strangely thrown into a situation where she finds herself a suspect in the ensuing investigation. In order to save herself and to just ‘do’ something during the trip, She starts digging (A pun for the Egyptian situation, I had to include it!). She finds a helpmate in the form of the mysterious Redvers. The only thing that felt a little off was the relationship between the aunt and the niece. The number of upheavals seemed a little dramatic even for a story like this. One less fight or a proper revelation would have satisfied me better, but Jane kept her silence, this is obviously a personal issue, and I am sure not everyone would harp on it like I just did.

The mystery itself had a few twists I did not see coming while maintaining the rationality that made it believable. The tenuous relationships between Colonial powers versus the Egyptian situation as a background felt believable and therefore added to the story. I actually thought it could have been a few chapters shorter and still made its point, but that is not too big a problem. I enjoyed the mystery aspect and the whole package and look forward to seeing what happens in the next one and where it might be based!