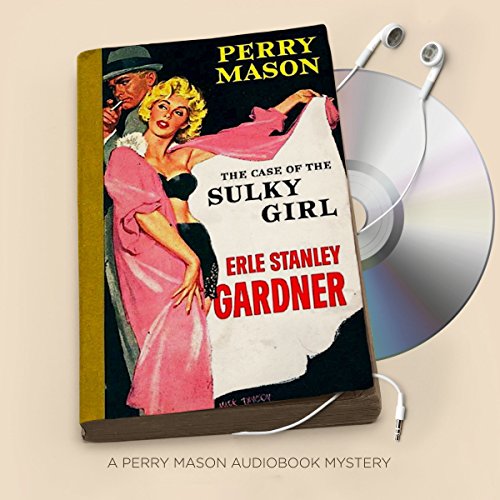 It has been forever since I picked up a Perry Mason book. When I was in high school, the lending library outside my school (we did not have public libraries) had tons of them, and they were relatively cheaper than the others. Over time I moved on from them but listening to this book brought back the reasons why I liked them in the first place.

The covers and titles are usually off-putting, to say the least, but I guess it gets people’s attention although the trend then and now are vastly different when it comes to the cover art (thankfully). The cover makes us guess that the focus is all on a woman (at least that’s what I thought), but the story is about more. The language or turn of phrase is not elegant or even unique, but there is this sense of drama and palpitating tension throughout the narrative that it felt so much…fun! A woman comes into Perry Mason’s office in a hurry and tries to play a part of a damsel in distress, which does not last. She needs legal council about money that should rightfully be hers. This ends up taking a whole day of Perry Mason’s as he is continuously speculating what ulterior motives were hidden behind all this chaos. More players are added to the fray as the events unfold. Immediately after that day, the man holding the purse strings is found dead, and everyone seems to want to ‘help’ this woman but are they?

The story moves at a breakneck pace taking us along all the way. Perry Mason triumphs at the end, but he does it in a very straightforward manner during this case. Della Street is voiced in a more simpering fashion that I imagined her to be in my younger days, but otherwise, the narration kept the mood up!

My last KU review was: Origami Man (Gibson Vaughn #5) by Matthew Fitzsimmons and my queue looks something like this now: