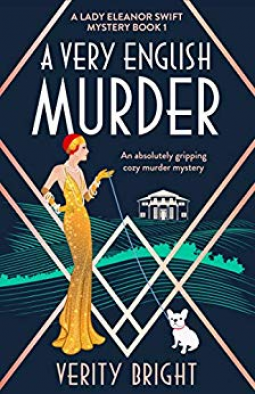 Yet another potential-filled historical cozy mystery series. This book can be divided into two distinct halves for me. The first involved the introduction of an intrepid explorer who has come back ‘home’ to take over a house and title that she has not thought about in a while. Ellie talks to herself and is described in a vapid fashion even though she has a trailblazer supposedly through the world. She annoyingly describes anyone she meets in words which are varying degrees of chubby/rotund. It gets annoying after a while.

The second part, however, surprised me. After all the introductions were done, and the story moved on to the plot, I started to get invested and feel for the story. On her first night home, Ellie sees a shooting but almost immediately after, there is no body and the following day, no blood either! The local constabulary refuses to take her seriously, which I did not blame them for considering that there was no evidence, and all Elenor was doing was pulling rank with her title. Once the details come into play; however, I appreciated the time and effort our heroine was putting into digging into the case. She and her trusty (?) butler go through a planned set of details to eliminate their suspects. The first have to conclude what the crime was, only then can they narrow down their field of suspects. Although I was not too caught up in the plot in this one, I was intrigued by the hints of the history of Elenor’s parents and uncle’s backstories. I will pick up the next book only see the possibilities hidden in what we have been told.

I know I may not have sounded very positive in what I talked about previously, but it is a sold book, with a believable mystery and pretty good writing. It just took me longer than usual to enjoy what I was reading. I still think the next might be even better!

P.S: The dog was the most adorable part of the narrative!